Uber is a new verb in the lexicon of Americans.  If you are in a city and you want to get from point A to point B, bring up the Uber app on your smartphone, tap the button and the screen asks where you are going.  You answer, the name of the driver, his/her picture pops up, and a map appears to show you where the driver is and how long it will take him to get to your location.  Amazing huh! 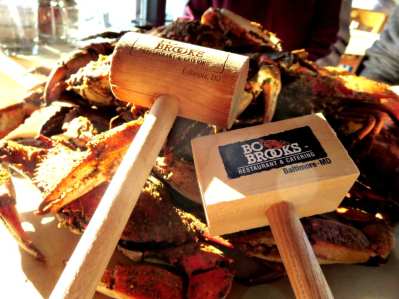 visit the National Aquarium.  Christine had visited Bo Books 45 years ago at around age 25 and remembered the crabs as tasty, bordering on spectacular.  Even though Bo moved the location to the Canton section of the city, the crabs were still good and the mallets were quite useful.

The National Aquarium was outstanding. We spent four hours at this wonderful facility.  We saw many varieties of fish, turtles, frogs, and nettles.  The main tank was so large that it took four scuba divers to feed the fish. We also saw a dolphin show that was very good and we needed a rest. 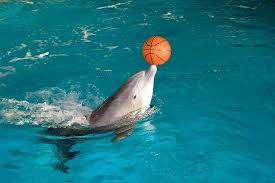 We stayed at a terrific place called The Hotel Indigo, a smallish boutique in downtown Baltimore.  We left our car in the garage for our entire stay and we ubered around the city.

Our first driver was Muhammed.  He took us on an adventure through several neighborhoods in Baltimore following the instructions of his GPS to Bo Brooks. There was Middle Eastern music playing on the MP3 player and the car was spotless. No money changed hands as everything was handled seamlessly via credit card on the app.

After having a wonderful dinner of fresh crabs seasoned with Old Bay and crab cakes, we left the restaurant and hailed Uber. Our ride was seven minutes away and we watched his route as he wound his way to us.  He called to tell us he had arrived and I told him we were at the other end of the parking area.  He came to us. Our driver’s name was Waqid and he drove a new Toyota mini-van. He talked all the way to our location. Very friendly!

The next morning, we were off to the Aquarium.  Our driver was a local named Gary—native of Baltimore.  He was like a tour director. He was quick to tell us about the good restaurants and local sights. When we arrived at the inner harbor, he pointed out all the good places to eat and shop.  Gary was the best driver of the six we had.

We were tired, the traffic was bad, and our next driver took eight minutes to arrive.  His professional name was Richard, but he preferred to be called Asher. He asked where we were from and Christine told him, Roanoke. He laughed and told us that he grew up in Roanoke. He went to Patrick Henry High where Christine taught.  Serendipity at work!!

About 7pm, we decided to go out to eat. For some unknown reason, we decided on Mexican.  I found a 4-star Taqueria on Eastern Avenue.  Our Uber driver, Raymond, took us to the exact location.  It was in a very seedy neighborhood and the place was closed.  He wouldn’t let us get out of the car. Instead, he took us 7 blocks in the opposite direction to a very trendy area and the James Joyce Pub and Restaurant.  Lamb stew and Shepherd’s Pie were just the thing and delicious. HOORAY for Raymond!

Hafiz took us back to our place. He got a little confused at a split intersection and we had to redirect. But he got us there without any problem.

Both Chris and I loved our Uber experience.  It is the only way to get around a city like Baltimore. We had x rides in total and spent $60.  Because I parked my car, I avoided a $60 valet fee and paid no parking fee. Balance is wonderful.