I was thrilled to see the recent article in the Roanoke Times on the declining bee population. This is a major problem for agriculture because bees pollinate plants. Well, you say, there are genetically modified seeds produced by Monsanto that don’t require pollination. But these seeds contain the pesticide dioxin, a deadly chemical agent. That’s the same chemical agent Monsanto used in Agent Orange. the killer agent from Vietnam. Dioxin is so toxic that it wipes out non-GMO crops, bees, other insects, animals and human health. I personally do not want any food produced by a Monsanto seed. Remember this company gave us saccharin and aspartame. The world’s center of PCB manufacturing was Monsanto’s plant on the outskirts of East St. Louis, Illinois, which has the highest rate of fetal death and immature births in Illinois.
It’s not so much that this company has produced toxic substances for years, but they fight so hard to defend these products with money when they come under attack. Our government is so susceptible to money. The big fight right now is the proper labeling of GMO foods. You have a right to know that you are eating a product of pesticide laced seeds. A bill (S. 2609) was defeated two months ago in the Senate that would prevent states from requiring labels. But Monsanto is already back lobbying for a watered down federal law on labeling. Our legislators are so weak. Mark Warner and Tim Kaine voted against the earlier bill (S .2609, but what about now.  They both think a federal solution may be needed.

And then there is Bob Goodlatte. He is on the Agriculture committee. He is essential to Monsanto. Bob takes money from Monsanto for his campaign. Do Bob Goodlatte, Mark Warner and Tim Kaine understand this issue? I am biased by my belief that Monsanto is an evil company. Because these seeds are engineered to be toxic pesticides masquerading as food, the EU(Europe) has banned their use. This is a matter of life and death. Stop killing bees and properly label genetically altered food. 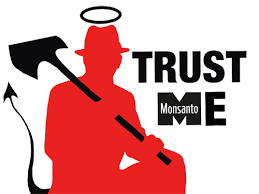 One thought on “Monsanto, Bees and Politics”

This site uses Akismet to reduce spam. Learn how your comment data is processed.