The following questions have been formulated as a tool for assessing signs of alcoholism.

Want to find out if you are an alcoholic, take the test.

If you answered “yes” to any of these questions, you may be at the start of a problem.

If you answered “yes” to 3 or more questions, you have a problem with alcohol and are most likely an alcoholic.  Spending $9 on the book, NO MATTER WHAT!!, will be the best money spent in the last year. It will provide a way to stop before tragic consequences surface.

If you answered 5 or more questions with “yes” you are an alcoholic and you need help.  It’s not too late.  Read the book NO MATTER WHAT!! and you will get answers.  Next, find an AA meeting and go—save your life!  YOU CAN GET SOBER!!

Order NO MATTER WHAT!! now! 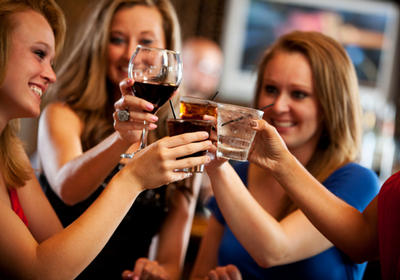 Men and women enjoy drinking for a variety of reasons—to celebrate some event, to socialize, or to relax after a long day. The stereotype alcoholic is usually a middle-aged man who would prefer to spend hours at his local tavern than be at home with his wife and kids. Now, that stereotype is being turned on its head. Young women, ages 18-35 are drinking alcohol far more than previous generations of women and are overtaking men in alcohol consumption. The rate of drinking in young women has risen sharply due to the homogenization of a generation that finds identity in cool alcohol beverages and the way our culture is starting to normalize binge drinking habits in women.

White women are particularly likely to drink dangerously, with more than a quarter drinking multiple times a week and their share of binge drinking is up 40 percent since 1997, per a Washington Post analysis of federal health data. Breaking down the numbers by race, 71% of white women drink some alcohol, but only 47% of black women and 41% of Hispanic women do so. In 2013, more than a million women of all races wound up in emergency rooms because of heavy drinking, with women in middle age most likely to suffer severe intoxication. This behavior has contributed to a startling increase in early mortality. The rate of  deaths due to alcohol for white women ages 35 to 54 has more than doubled since 1999, per The Post analysis, accounting for 8 percent of deaths in this age group in 2015.

Why are young women drinking more? A combination of advertising, changing generational attitudes and advancements in women’s rights has contributed to normalization of excessive drinking by women. Drinking regularly is marketed as something that cool, young and liberated women do to assert their independence. While progress in gender equality has led to many great things, more women dying of alcohol poisoning is not one of them.

For women, binge drinking is defined as having 6 units of alcohol in less than 2 hours.  A single glass of wine and one bottle of beer have 2.3 units. A shot of hard liquor has about 1 unit of alcohol.  It is easy to see that someone passing on shots at a night club or bar and only drinking wine would not consider herself a binge drinker.  Yet, several glasses of wine at home can be considered binge drinking. If someone is unclear about what constitute binge drinking, she may think there is no problem and may delay seeking help.  If she constantly thinks about when she can have her next glass of wine and plans her day around her drinking time, an alcohol problem is developing. Other signs include limiting herself to one drink or deciding to forego alcohol for a week, craving alcohol during the day or experiencing night sweats, nausea or shaking if she doesn’t have a drink.

It is important to note that women’s biological composition makes them more vulnerable to the effects of alcohol. Women have less of the critical enzymes needed to break down alcohol, making the effects of drinking quicker and more potent.  Women also tend to have more body fat, which stores alcohol in the body longer. A woman’s monthly cycle can also change how alcohol impacts her. All this leads to the conclusion that if women are drinking as much as men, the results are likely to be more dangerous for her.

With modern demands for a thrilling career, a picture-perfect home, and above-average children, it comes as no surprise that women are feeling stressed.  I watch my own daughters and wonder how they do all the things they do.  Advertising and social media may try to normalize it, but excessive drinking is almost always a sign of an underlying problem.

Be mindful of your drinking habits and think about your attitudes toward alcohol.  Never dismiss excessive drinking as harmless fun.  Are you a responsible drinker and do you know what binge drinking is?  Three glasses of wine are binge drinking for a woman. Look out for yourself and loved ones who may be struggling with alcohol use. Watch out for young moms who need “mommy’s little helper” to help with their hectic days.  If there are signs of alcohol dependence, seek help and find out.